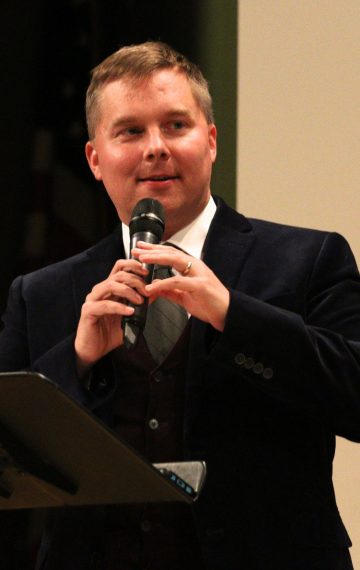 The Great Northern Radio Show charted fresh new waters in our first program from the Zenith City of the Unsalted Seas on Nov. 12, 2016. Our Duluth, Minnesota, debut was broadcast live from the Lincoln Park Middle School auditorium on both KAXE/KBXE Northern Community Radio and KUMD-Duluth Public Radio.

Host Aaron Brown talked about the role Duluth plays in the lives of people throughout Northern Minnesota, telling the tale of his family’s first voyage to the “big city” when he was a kid. We looked at Duluth through the eyes of tourists and locals, paying special attention to the city’s unique music and arts scene. 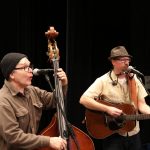 Duluth-based bands Woodblind and Dance Attic entertained us with their unique sounds as we highlighted the quirky and tight-knit Duluth local music scene. Mayor Emily Larson dropped by for a cameo in one of the sketches and to tell us about all the good things happening in the Zenith City. Meanwhile, author and judge Mark Munger told a charming 1970s tale of bald tires and the big hills of west Duluth.

Our comedy adventures included a cabbie’s explanation of the “real story” behind Duluth’s tourism success, including the giant hamsters of the Skywalks. We join the unusually difficult journey of a new band working their way up the Duluth music scene. A new drug called “Hipster” has some rather alarming side effects. And students from the Duluth Speech Team read from J. Proctor-Knott’s famous 1871 speech about the “untold wonders of Duluth.” That’s a must-listen for fans of hardcore 19th Century sarcasm. 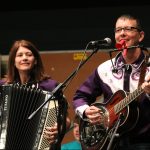 The Great Northern Radio Players for this show included Jason Scorich, Louisa Scorich, Mark Venheizen, Julie Venheizen and John Bankson on sound effects. Special thanks to Emily Moe for foley engineering many of the sounds in this show.

This Nov. 12, 2016 program aired live on 91.7 FM KAXE Grand Rapids, Aitkin and the Iron Range, 90.5 KBXE Bagley and Bemidji, 89.9 Brainerd and 103.9 in Ely, as well as locally on 103.3 KUMD in Duluth. The show is also rebroadcast on independent public radio stations throughout Minnesota and distributed as a live stream and podcast.