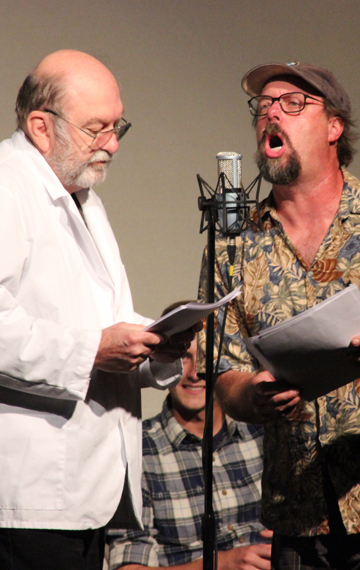 On Saturday, Sept. 27, 2014, the Great Northern Radio Show traveled to Park Rapids, Minnesota, to perform a show from the newly remodeled Armory Square. How newly remodeled? The place was still covered in sawdust and extension cords. One bathroom didn’t have a door and the other was shared with the Mexican restaurant downstairs. Come to think of it, Armory Square wasn’t done yet. But it was an awesome stage in a big, glorious building in the heart of a ferociously artistic small town in north central Minnesota.

The show featured the Minneapolis indy folk group Tree Party, a high energy act with just the right amount of yodeling. The Sterling Roots also performed their three-part harmonic wonders on the audience. Both groups included people with ties to the Park Rapids area.

Our adventures this show included a Congressional race between two deeply unpleasant people, a potato-related scheme to nab Al Capone, and a whitetail deer’s visit to the dentist.Also featuring a grasshopper newscast.

This Sept. 27, 2014 program aired live on 91.7 FM KAXE Grand Rapids, Aitkin and the Iron Range, 90.5 KBXE Bagley and Bemidji, 89.9 Brainerd and 103.9 in Park Rapids. The show was also rebroadcast on independent public radio stations throughout Minnesota and distributed as a live stream and podcast.