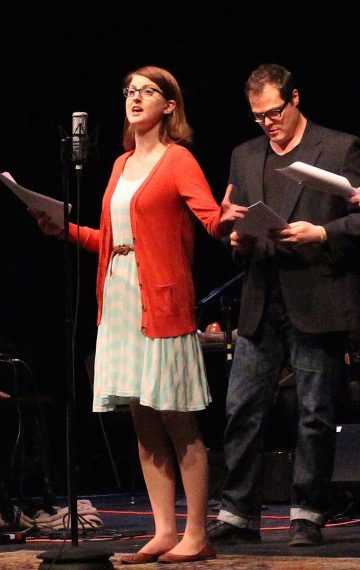 At first, Grand Marais seems like it’s trying to win some kind of “quirky town” contest. Then you realize that the place is just so far up Minnesota’s north shore of Lake Superior that the residents don’t much care what you think of them. And that’s precisely the charm of this small town up the shore in Cook County.
A refuge for travelers, a haven for artists, a year-round home for misfits, Grand Marais welcomed us to the Arrowhead Center for the Arts on June 13, 2015. And, not surprisingly, we felt right at home in the cold lake breeze and bubbling bohemian scene which blended smoothly with lumberjack grit and ground elk (available for purchase at the grocery store).

We explored the town, splashed down to the bottom of the Devil’s Kettle waterfall, learned the secret behind the world’s greatest donut, and went back in time for a Revolutionary War M.A.S.H spoof.

This show also features singer/songwriter Timmy Haus, a late local add, who was discovered on the stage of the Gunflint Tavern by our inebriated advance team. “Timmy Haus!” became our rally call during times of tumult.