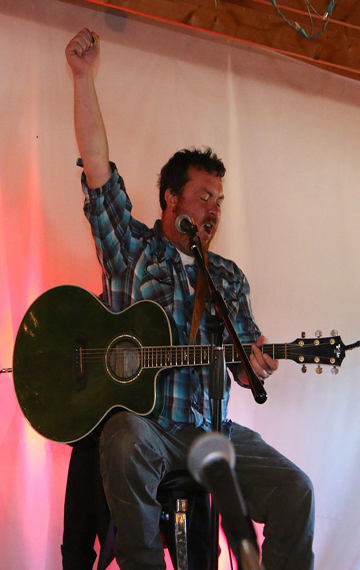 But happened when we took our show to an actual barn?

We had a good, old fashioned public radio square dance, that’s what!

The show featured the popular Duluth-area musicians The Hobo Nephews of Uncle Frank, Teague and Ian Alexy. Singer/songwriter Timmy Haus sang his unique McGregor drinking song along with other fun tunes. And the teenage sensations Porcupine Creek brought a big bluegrass sound to our rustic venue. One lyric went “I was born in ’99” and the guy really was born in ’99. Truly, bluegrass has come full circle.

Teague Alexy read stories from his new book “The New Folklore” with performance help from our acting team.

All that and new audio essays about Modern Life in Northern Minnesota by producer, writer and host Aaron Brown.

The Nov. 7, 2015 program aired live on 91.7 FM KAXE Grand Rapids, Aitkin and the Iron Range, 90.5 KBXE Bagley and Bemidji, 89.9 Brainerd and 103.9 in Ely. The show was also rebroadcast on independent public radio stations throughout Minnesota and distributed as a live stream and podcast.

For this Nov 7th, 2015 show, Aaron Brown and the Great Northern team found themselves at Larson’s Barn near McGregor, Minnesota.