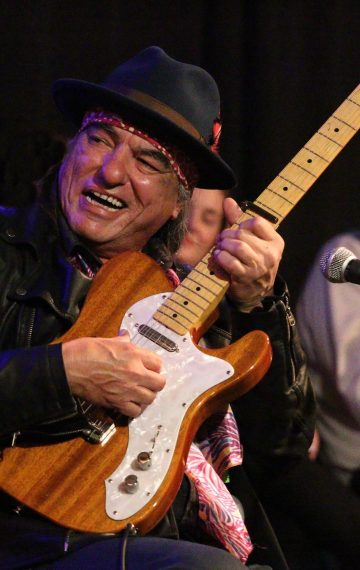 The musical act for this show is the legendary musician Keith Secola who brought his mix of Native American flute and rock ’n’ roll to the stage. He played with our house band, Katie Houg and the Track Stars, including Houg on keyboards and vocals, Corey Medina on guitar and vocals, D.C. on bass, and Eric Sundeen on drums.

AB’s Cousin Slim was back, this time with a scheme to harvest wild rice on a jet ski. “Rez Reporter” Rob Fairbanks was on hand to set him straight and share some comedy. Tired of school fundraising? A mysterious woodsman offered a new idea to a local PTA.

This Sept. 24, 2016 program aired live on 91.7 FM KAXE Grand Rapids, Aitkin and the Iron Range, 90.5 KBXE Bagley and Bemidji, 89.9 Brainerd and 103.9 in Ely. The show is also rebroadcast on independent public radio stations throughout Minnesota and distributed as a live stream and podcast.