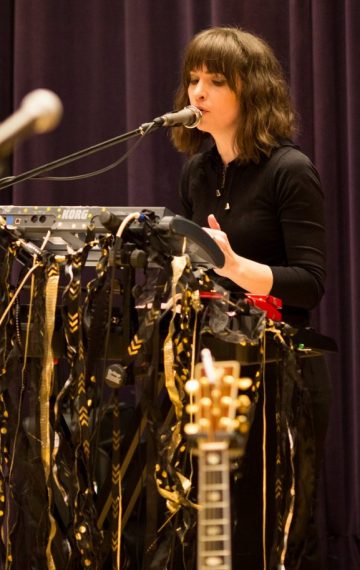 The Great Northern Radio Show returns to Bemidji State University for another exciting show in the First City on the Mississippi River. The first part of our March 3, 2018 live broadcast introduces listeners to the culture of Bemidji and our strained Northern Minnesota relation to this elusive thing some call “Spring.”

Aaron Brown details a few upcoming events in the area, including the “home, sport OR travel show” (because who can afford all three?). Katie Houg sings about the Minnesota spring, or lack thereof. The Great Northern Radio Players dive headlong into the Minnesota linguistic phenomenon of “ope,” the sound Minnesotans make instead of saying “excuse me.”

In addition, Aaron talks about “vacation envy,” the sort of thing that happens when your casual acquaintances share pictures from warm climates this time of year. The Great Northern Radio Players take us into a frog pond where the spring peepers are trying to spice up their act before spring. A fashion designer has big ideas for Paul Bunyan’s new wardrobe. A game show asks the important question, “Eat It? Or Wear It?” And somehow, once again, Neil Diamond shows up to sing about his “Bemidji Woman.”

Musical guests Ron Arsenault and Dave Pengra use their gifts of storytelling and song to set the mood for this show. Duluth alt-folkster Ingeborg von Agassiz — a Thief River Falls area native — brings us songs from her critically acclaimed new album using her unique mix of synthesized beats, looping pedals and her powerful dynamic voice.

Meantime, we meet guests Gary Rozman of the Beltrami County Historical Society, BSU philosophy postgraduate Spencer Knox, and Red Lake High School junior Autumn May and her teacher Marcia Roline. May won a national contest related to the study of history and will be traveling to Normandy, France to learn more about a long lost Native American soldier from WWII.

This program features the music of the Great Northern Radio Show’s all star house band Katie and the Opes, led by Katie Houg on piano and vocals and featuring Aaron Schnackenberg on bass, Doug Quance on drums, and the great Kristi Miller on mandolin and vocals.

This episode was written and produced by Aaron Brown with additional material by Jason Scorich and C.J. Anderson. Production and stage management by Sarah Bignall with assistance from Tammy Bobrowsky. Audio engineering by Dan Houg and Chad Haatvedt.

This March 3, 2018 program aired live on 91.7 FM KAXE Grand Rapids, Aitkin and the Iron Range, 90.5 KBXE Bagley and Bemidji, 89.9 Brainerd and 103.9 in Ely. The show is also rebroadcast on independent public radio stations throughout Minnesota and distributed as a live stream and podcast.